Hidden in the depths of the huge and bustling city of Hong Kong, there is a family of four who are comfortably relaxing in a homely retreat which gives them a sense of peace amongst the chaos.

Key to this Australian family’s peace of mind is knowing their home has been built around the concepts of functionality, whilst keeping true to their eccentric aesthetic.

“Everything in the home was designed for multiple functions,” says Rosie Blay from Liquid Design, who was the interior designer behind the space. “One issue for the family was storage, so we designed a large dividing unit in the living space that accommodates that massively.”

Aiming to incorporate impact alongside the practical elements of the home, Rosie opted to install two EcoSmart burners in the middle of the 4.2m long dividing unit.

“It’s such a large bulky piece, so we thought it would be nice to open it up and have a feature inside,” she explains. “This is where the EcoSmart burner came in. We thought it was a perfect match for our design.

“On the lounge side the unit acts as a home for the television and equipment when not in use, and it also creates a sense of privacy as you can’t see directly into the lounge when the front door is open. The burners take the piece from ordinary to extraordinary.”

"The burners take the piece from ordinary to extraordinary."

By choosing two burners rather than one, Rosie ensured the flickering flames can be seen from both sides of the dividing wall, providing a focal point for both the lounge space, entranceway and hallway.

It wasn’t only the aesthetics of the EcoSmart burner that had Rosie hooked; the practicality of the unit also appealed to them, as they didn’t have to mess around with flueing or any other form of tricky installation.

“We had no problems whatsoever with installing the EcoSmart fire burners,” she says. “We are so pleased that we are planning to use it in our other upcoming residential project on the rooftop as a coffee table-come fire place.”

The design for this particular home was based around natural and earthy materials, including reclaimed wood and the element of fire, plus touches of teal blue mixed into the décor.

“The design brief was to create a healthy family home for their children to grow up in,” explains Rosie. “We believe we fulfilled this by adding many design features that promote health and wellness.

“We installed new windows that were double glazed with low-e film to keep the warmth in in the winter and keep the heat out in the summer.

The EcoSmart burner is also effective in adding that extra bit of warmth in the winter time. We also love how the burner is eco-friendly by only burning bioethanol.”

The environmental aspect was a distinct selling point for Rosie and the client. In addition to choosing EcoSmart for its clean-burning flame, they prioritized repurposing some of their existing furniture in the rest of the home.

“The clients’ style is very eclectic,” says Rosie. “We mixed original pieces from their old home with new and custom made pieces.

“The mix of furniture works well around the divider, which is a honeycomb metal covered in beige stone veneer. We felt that the fire was a great element to add to these materials as it really created that cozy/homely feeling.” 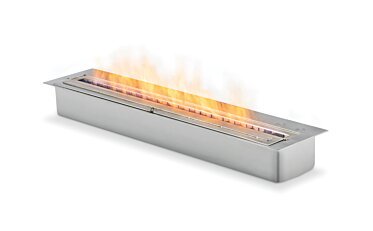 The first time award-winning, Sydney-based interior designer Pia Francesca Ruggeri specified an EcoSmart Fire was for her new home in Sydney’s Eastern Suburbs. The reason? She specifically wanted to have the ambience of an open fire, but knew a traditional fireplace wasn’t feasible given she lives in an apartment.

The brief was clear: to create a cosy environment in an open, exposed space on the terrace of a Brisbane high-rise apartment.

We have your electric fireplace solution - Electric Series is designed for all room sizes from residential to commercial environments. - EcoSmart Fire

One of the biggest challenges faced by modern designers is achieving the delicate balance between form and function.

It’s traditionally been the domain of indoor spaces, but the open fireplace is increasingly being integrated into outdoor rooms for year-round ambience and warmth. For some, EcoSmart Fires are incorporated as a central focal point, for others they’re a simple, stylish and effective way to bring an alfresco area to life

When designing a contemporary new single dwelling from scratch, architectural and interior design firm SAAJ Design in Melbourne was given carte blanche to celebrate as many design opportunities as possible, creating a highly private home with strong connections to the exterior.